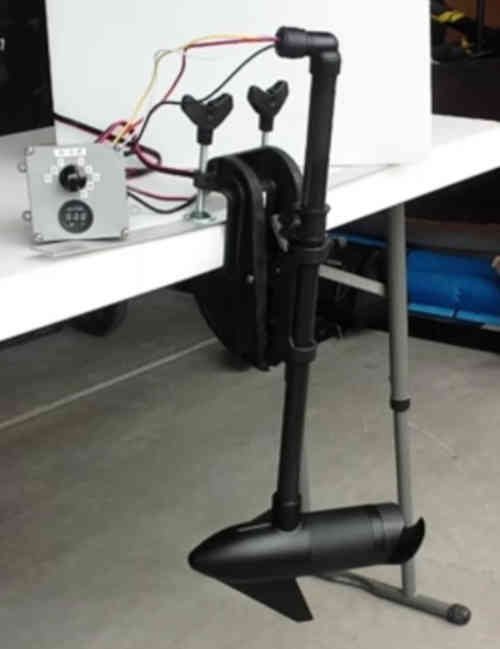 The most common type of propulsion for kayaks is electric; but they are not the only option.

You will need to choose between:

Trolling motors that are powered by electricity.

Trolling with a gas-powered outboard motor.

Let’s take a look at these two options for kayak propulsion.

Can I put an electric motor in my kayak?

Electric trolling motors with a battery system are preferred by kayakers.

Kayaks can easily be equipped with smaller electric trolling motors. Because they are lightweight and take up very little space in the kayak, low-power electric motors are ideal for powering such small boats.

Electric trolling motors come in a variety of sizes and weights, with the majority being smaller and lighter than gasoline motors.

Many newer models of electric trolling boats come equipped with displays, GPS, and autopilot, giving them an advantage over gasoline-powered boats. Some even allow you to check the charge level of the battery.

Can a kayak be equipped with a gasoline engine?

Electric trolling motors aren’t the only option for getting a kayak moving.

A gas engine can be installed in a kayak, but only with a very weak engine. Gas engines with a power output of 2 hp or less are used to keep the weight down and allow for fuel loading. Some commercially available electric kayaks, on the other hand, are equipped with special engines that produce up to 9.5 horsepower.

If you go with a gas engine, keep in mind that the extra weight of the engine and gasoline is the most significant disadvantage, especially if you go with a more powerful engine.

Even in a small boat, most gasoline engines over 2 horsepower take up a lot of room, are too heavy for a stern, and have too much thrust for a light kayak.

It’s critical to pick the right motor for your kayak, and the best motor is determined by the design and size of your kayak. The thrust of a trolling motor is usually expressed in pounds, and the general rule is that a thrust of 2 pounds should be maintained for every 100 pounds of body weight.

When looking at the list of suitable motors, it’s a good idea to consider the total weight of the kayak (including any camping, hunting, or fishing gear on board).

It’s also worth noting that increasing engine thrust does not necessarily increase kayak speed; on the contrary, it can make the kayak more unstable and uncontrollable. The engine’s powerful thrust causes the stern to sink deeper into the water, lifting the front half of the kayak out of the water and rendering it uncontrollable.

A gasoline engine should have a low power output, preferably less than 2 horsepower.

You have more options with electric trolling motors. You should also think about the battery’s weight.

The larger the trolling motor and the corresponding battery, which can range from 12 to 36 volts, the more power it consumes (in 12-volt increments).

Electric trolling motors that run on two batteries are also available, but these are obviously not suitable for smaller boats like kayaks. It is preferable to select a motor system that can be powered by a single battery, as this will reduce overall weight costs.

Most types of kayaks can use electric beam trawls powered by a 12 V battery.

There are a number of other factors to consider when selecting a motor for your kayak, in addition to power, thrust, and propulsion source (gas or electric).

The shaft’s length in millimeters. A long propeller shaft is not required because kayaks are quite deep in the water. However, because you want the propeller to stay in the water at all times, it must be long enough to do so. In most cases, a shaft length of 24 inches (61 cm) is sufficient.

Control method. There are a variety of motor controls available, but for kayaks, you’ll need a tiller with an extension or a remote control so you can adjust the hull and speed while sitting in the kayak and facing forward.

Where should I mount the motor?

It’s not as simple as it sounds to attach a trolling motor to your kayak. There are several locations on your kayak where you can successfully mount the motor.

The trolling motor can be mounted on the kayak’s bow or stern. Some people mount it on the boat’s side, but this is not recommended.

There are benefits and drawbacks to both bow and stern mounting.

Trolling motors mounted on the bow are also common, but beam-mounted trolling motors are more common due to their lower cost, lighter weight, and smaller size.

Why put a motor in a kayak?

Is there a benefit to having a motor in your kayak? After all, isn’t paddling the main purpose of a kayak?

By far the most popular and traditional method of kayaking is paddling. For centuries, the humble paddle has been used to steer and propel kayaks, and with good reason. Why would you add a motor to a kayak that already has one? So what’s the point of adding a motor to a perfectly functional setup?

Modern kayaks evolved from traditional Inuit fishing boats, but the design has evolved significantly since the early boats, which we have embraced.

Modern kayaks’ new hull features have made them incredibly versatile, allowing them to perform a wide range of tasks such as sea travel, fishing, and whitewater sports. Why not equip kayaks with the most up-to-date propulsion options, such as motors, as they continue to evolve?

Kayak motors, whether electric or gasoline-powered, are a novel way to get more out of your kayak.

motorized kayaks are now available on the market

The commercial success of the first motorized kayaks, as well as the growing number of people who own their own motorized kayaks, has prompted kayak manufacturers to innovate their production to meet market demands.

The number of motorized kayaks available is growing, but here are a few to get you started.

How to electrify your fishing kayak

The simplest and quickest way to get your small plastic boat moving is to install an electric outboard motor powered by a lithium-ion battery. In his Hobie ProAngler 360 pedal boat, Florida kayaker Brandon Barton installed a Torqeedo electric motor and a matching lithium-ion battery.

Mr. Barton employs Torqeedo in three different ways. Inshore fishing with live bait, sideline watching, and tournament entry and preparation for bass tournaments are all things he does with it. “The electric motor is ideal for trolling live bait slowly. “The motor is great for slow trolling live bait and will pull you back to shore if conditions get bad during a storm,” he says.

I use the motor to get deeper into the marshes off the coast, then switch to paddling in shallow water. When I entered bass tournaments, I gained a significant advantage. The fastest way to get to the fishing grounds is with an electric outboard motor. It’s particularly helpful before going fishing.”

Barton used Innovative Solutions’ brackets to attach the motor to the plastic boat, which made installation simple. He combined the existing rudder of the pro angler with the pedal system’s fin to steer.

Trolling with an electric motor is one of the most convenient ways to power your kayak. Most kayaks can be outfitted with a trolling motor with 45 pounds of thrust and a 12-volt deep-cycle battery, which is popular among anglers, for a few hundred dollars.

Installing an electric trolling motor on the side of a kayak and controlling it with a tiller is the most cost-effective option. Some companies sell aftermarket mounts or a 24-inch board that bolts through the shaft, but these are made in the shade. Connect the motor to the mount and place the battery in the tank.

Trolling motors are not as efficient or fast as electric outboard motors, but they are more maneuverable, according to users. A GPS can be added to a trolling motor, allowing it to be programmed to follow a specific course or to hold the boat in place for maximum control.

Anglers who own a yak with a trolling motor can get to their favorite fishing spots much faster.

Most kayaks can be equipped with electric outboard motors and trolling motors. Several manufacturers, however, have responded to the trend toward boat electrification by launching their own small electric boats.

Kayaks with a rotor motor and a sit-on-top option for mounting an electric motor are called factory-made motor boats. Paddles, pedals, or a motor are all options on some models. The motor is usually mounted in the center of the cabin on a shaft. The throttle is used to control the kayak’s speed, while the rudder is used to turn it.

For the past year, tournament specialist Roland “Tex” has been using an Old Town Sportsman Autopilot 136″. “Right out of the box,” the boat is “ready to catch.” The system’s components are all in sync, work well together, and are dependable.

With less effort, anglers can go farther, faster, and more confidently. A 12-volt deep-cycle battery or a lithium-ion battery can power the iPilot. To improve the kayak’s stability, the battery is mounted under the seat. All connections are weatherproof, and electrical cables run through the hull. If the propeller is exposed or the angler falls into the water, two switches turn off the motor.

Simply mount the battery under the seat and run the motor unit through the deck drain when you arrive at the launch site, and the boat is ready to go.” The motor is located in the center of the kayak, allowing you to raise both the motor and the boat when you are in shallow water. The boat’s draft can be reduced. A remote control is used to control the speed and direction of travel. The boat is more maneuverable thanks to the large rudder, especially at cruising speed.

Powering a small plastic boat is no easy task, whether an angler builds his own trolling motor for his kayak, installs an electric outboard motor, or buys a real electric kayak. You can fish farther, faster, with less effort, and with greater peace of mind when you use electric power.